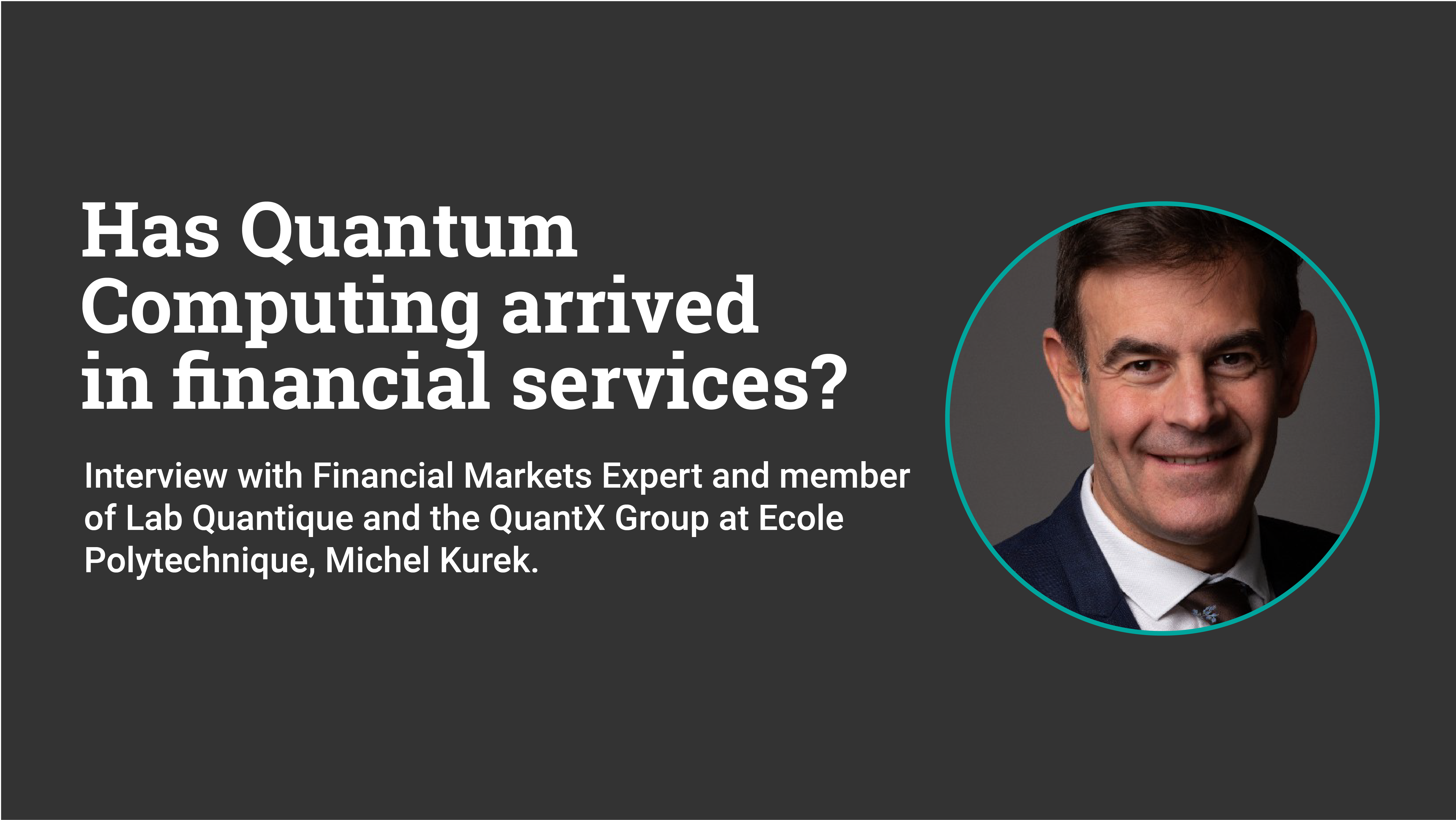 The field of quantum computing is incredibly exciting and in equal parts, terrifyingly complex – at least for your humble author. Without diving too far into the rabbit hole, this article seeks to answer some of the basic questions; What is the current landscape? Is anybody using Quantum Computing and what does the future hold?

To answer these questions we spoke with Michel Kurek. What is a Qubit and why is it important?

Qubits are typically the information unit coded in atomic or subatomic particles. With a spot of clever engineering, Quantum computers can manipulate a Qubit into a superposition or entangle two qubits to create a quantum correlation effect. In superposition, a Qubit can represent numerous combinations of 1’s and 0’s at the same time. This means the Quantum Computer can perform simultaneous computations on the same Qubit, dramatically increasing its computational ability.

Or in more technical terms, Superposition allows a qubit to encode several pieces of information in parallel. The state of the qubit is a linear combination of the states 0 and 1 (in a proportion defined by two numbers). It is the superposition of the encoded states that provides the power of representation and processing of the quantum information. A register of 2 qubits makes it possible to represent or process the equivalent of 4 bits, 3 qubits the equivalent of 8 bits, and n qubits the equivalent of 2n bits. Adding a qubit to a quantum register doubles the power of the system. And 64 qubits? They give you 2^64, which is 18,446,744,073,709,600,000! That’s about one million terabytes in classical computing.

In quantum computing, entanglement allows the implementation of powerful logical operators/gates that can make the computation even more efficient.

An industry standard for Quantum Computing is still to be determined so when discussing Quantum Computers, we are really discussing Qubits and Quantum Gates. There are currently 6-7 different types of qubits (see fig.1) being applied in industry and each have their own engineering challenges.

Depending on the application, different Qubits can be used for different problems. For example, Photons are the only Qubit that can travel and can be maintained at room temperature which makes them a prime candidate for quantum communication.

Within Quantum Computing, the approach taken by most of the IT giants (excluding Microsoft) uses the superconducting properties of electrons. This requires cryogenic freezing of the electron to around 15 milli-Kelvin (slightly colder than a January morning in Chicago).

Another approach uses ions. This involves trapping an ion particle within a vacuum and is being driven by companies like IONQ and also the conglomerate, Honeywell.

In order to process the Qubits, as in classical computing, a quantum circuit applies gates (using for example microwaves or lasers) to manipulate the quantum information and finally compute an answer. There is one other way, called Quantum Annealing which is used by D-Wave (one of the industry leaders). Quantum annealing is a metaheuristic for finding the global minimum of a given objective function over a given set of candidate solutions (candidate states), by a process using quantum fluctuations. It works well on very specific problems like optimisation and if you were interested you can pick up a Quantum Annealing computer from D-wave for between $10-15ml.

There are many. The biggest one is fault tolerance. Qubits are incredibly hard to maintain. Even the slightest bit of noise (background radiation, electromagnetism, a large sneeze) impacts the Qubit making it irrelevant. The current understanding is that 1,000,000 Qubits would only really have 1,000 usable Qubits once error correction using redundancy principle is taking into account. So the end goal for Quantum Computing is to improve the stability of the Qubits and have a Quantum Universal Computer that can handle any algorithm – which realistically is still a good 10-15 years in the future (see fig.2) 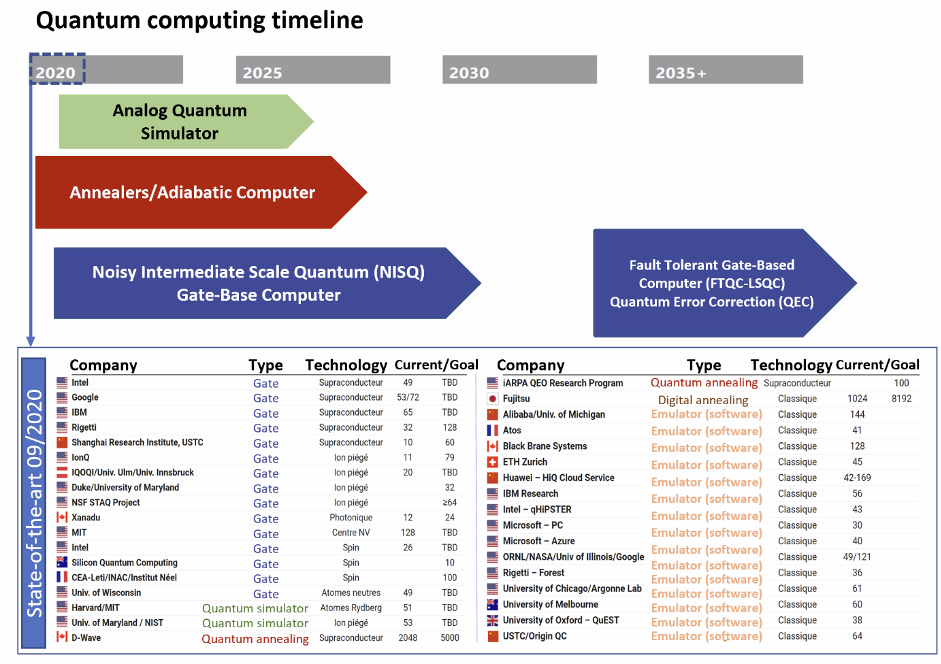 Does that mean we wait 15-20 years to play with Quantum Computers?

No. The industry is learning to live with the current deficiencies and are implementing NISQ (Noisy Intermediate-Scale Quantum) technologies. Basically this means they are developing algorithms that can be deployed on the basis that there will be some errors which can be accounted for OR they are using a combination of quantum and classical computing.

Companies like Atos Quantum have developed emulators that simulate a 50 Qubit Quantum Computer. You can also set the fault tolerance for the Qubit in the simulator to give you a realistic result based on todays machine.

Uncluttered by the computational constraints of todays infrastructure, there is also a new branch of Quantum Inspired Algorithms which can be tested on these simulators.

Is anybody using this in finance?

Yes, there are several banks that are partnering with the IT monoliths or startups or directly investing in Quantum Computing. The obvious use cases in financial services are based around Portfolio Optimisation, Quantum machine learning (being able to train a model in a fraction of the current time with much larger datasets) and modelling (JP Morgan completed a proof of concept for option pricing) https://arxiv.org/pdf/1905.02666.pdf

The advantages of being able to run vast computations in very short time periods are obvious.

Out of the c.100 industry partners working with IBM ‘s Quantum Computers, 7 are financial services firms including JP Morgan, Barclays, Goldman Sachs and Wells Fargo. Overall there are currently 20 financial institutions in the quantum ecosystem.

How to run an algorithm on a Quantum Computer

Whereas D-wave is actually selling their machines, most big IT firms are taking a cloud utilisation model, QaaS : Quantum as a service, which is enabling a lot more companies to experiment with the technology.

There is apparently over 50 different programming languages that are being run on Quantum Hardware. Most big vendors have developed their own languages which syntax is pretty much like Python however Microsoft, being Microsoft, developed a language called Q#. A good summary can be found at https://quantumcomputingreport.com/wp-content/uploads/2018/06/Overview-and-Comparison-of-Gate-Level-Quantum-Software-Platforms-Final-June-21-2018.pdf

The industry is really going to be driven by effective use cases for the technology so free access to emulators and or direct access to quantum computers is available.

As the practical applications of Quantum Computing increase so will investment and eventually adoption.

So, to sum up, Quantum Computing is not quite there yet however it is coming and it will have a massive impact. Bearing in mind there are simulators out there, if you were given a quantum computer tomorrow – what could you do better?

Michel is the ex Head of Algorithmic Execution at Societe Generale and now a member of Lab Quantique (a Paris based Think Tank) and the QuantX Group at Ecole Polytechnique (a group focused on the field of Quantum Technologies).